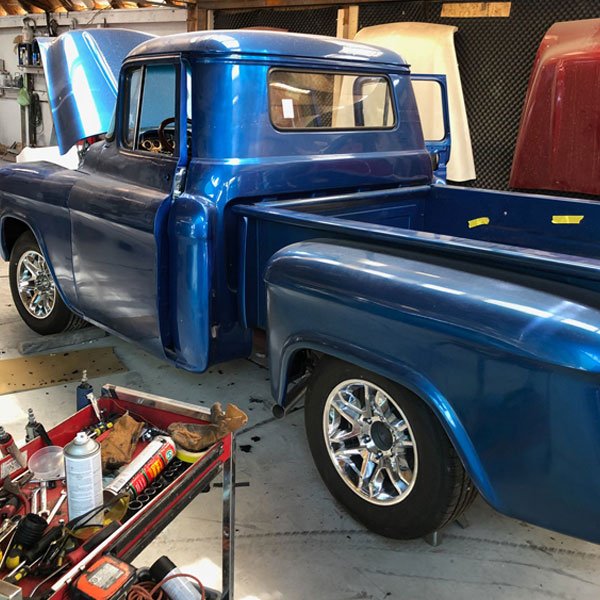 Since the invention of the automobile, it seems people come down on one of two sides – those who see them for their mere utility, and those with a genuine love for the manufacturing and design that goes into them. Those who find themselves in the second category look at automobiles as not just machines, but works of art. So it’s no wonder why the 1950 Chevy Truck has such dedicated admirers.

The 1950 Chevy truck in particular has a strong culture of aficionados for both its history and design.

The History of the 1950 Chevy Truck

When it comes right down to it, we have to define what exactly constitutes a “classic” or “antique” car. It’s generally understood that classics are between twenty five and fifty year old cars, while an antique car (or sometimes a “vintage” car)  is anything over 50 years old.

The earliest Chevy truck dates back to 1918. Called the “One-Ton”, this vehicles was intended to be both affordable and flexible. You could buy it in its most rudimentary form (consisting of the express body and flatbed) or suped-up with an eight-post curtain top.

In this same year, Chevrolet merged with General Motors, and became a unique division within GM. From there, continual improvements were made.

In 1929, the Chevy truck engine upgraded from 4-cylinders to 6-cylinders. In this year, wooden wheels were replaced with steel disc wheels (this was a common trend in automobiles in general).

From the years of 1929 to 1936 (sometimes referred to as the “Stovebolt Era”), the Chevy engine’s external slotted-head fasteners began to look like the bolts you could see on wood stoves.

During America’s involvement in World War II (beginning in 1941) the government ceased civilian production of vehicles and energy was focused on war production. It wasn’t until 1946 that Chevrolet was allowed to begin producing for civilians again, and the Advanced Truck stage of Chevy production (from 1947-1954). This gave rise to what would become officially known as the 1950 Chevy truck.

This timeframe saw the following improvements made to the 1950 Chevy truck:

Beyond that, many 1950 Chevy trucks saw a bed length stretch of roughly three inches. This was a cargo box style that would be a defining characteristic of Chevy all the way into the 1980’s.

In 1955, the 1950 Chevy truck underwent a shift from torque tubes to an open drive-shaft.

Many people who adore the 1950 Chevy truck have one sitting in their backyard or in their garage in tragically unworkable order.

It’s fun to think about finally getting around to restoring that 1950 Chevy truck. The idea of working on that old beauty with some good music playing in the background, knowing your restoring it to the state it was meant to be in can be thrilling and almost romantic.

But that’s because it’s just an idea.

When it comes right down to it, restoring a 1950 Chevy truck is hard work. In order to complete this task, here are some things you can expect to have to do.

Search for the right parts

Before you can do this right, you have to absolutely sure you have all the right parts. There’s almost nothing more frustrating than finally getting down to working on the restoration only to find that some crucial component or part you need is off by just a small measure – rendering it completely unworkable.

Even finding these in the first place takes searching through:

Not only that, aftermarket parts often require their own restorations as well.

Furthermore, you will have to have all of the right tools for the job as well. Are you sure you know exactly which tools you need? Can you be sure they will accommodate all of the different parts you need?

Restore the 1950 Chevy truck yourself

Properly restoring a 1950 Chevy truck means restoring it from the ground up. Is that something you had in mind? You will have to figure out how to complete all of the following tasks:

It’s a rare person who has all of the knowledge and experience required to restore a 1950 Chevy truck themselves. It’s a far rarer person who can do it in a way that utilizes all of the power and efficiency of modern technology while still retaining its classic look and feel.

Your Custom Chevy Truck can restore your 1950’s Chevy truck in just this way. We offer a wide variety of features to enhance the power and performance of your vehicle as much as possible.

We are dedicated to bringing the classic 1950 Chevy truck back to life with the following standard features:

When you leave our shop, you will do so in a 1950 Chevy truck that retains all of the original aesthetics that the original manufacturers intended, with the addition of powerful and stylish features for the modern age. To get started, simply contact us today!